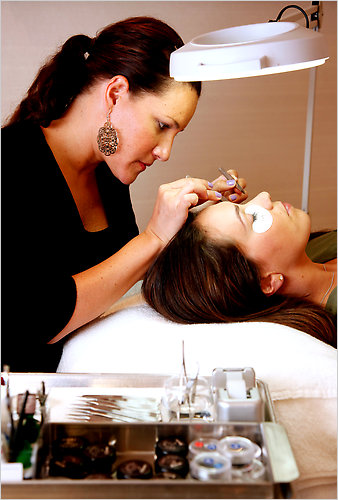 AT the Pierre Michel salon on East 57th Street in Manhattan, the expensive, laborious and luxurious process of beautification reduced one client to tears.

“I can’t see,” the woman said, her eyelashes newly layered in $500 mink-hair extensions, tears streaming down her cheeks.

“Do you need the fan?” asked Collette Draut, her aesthetician, as she handed her client a battery-operated gadget to blow away the fumes of the pharmaceutical-grade glue.

Ms. Draut, who works lash-by-lash to affix individual mink hairs to her clients, is one of the salon’s 75 beauticians who practice a specialty service. Each has an adoring client base that has fed Pierre Michel’s reputation as one of the city’s most decadent salons.

I recently spent a day observing the creative process at the salon’s new location, a 9,000-square-foot swath of a skyscraper at Lexington Avenue and 57th Street. (Until November, the salon, which has moved several times, had been around the corner.)

The new place has 61 workstations devoted, for the most part, to the hair, face and hands. Dressed as an assistant, I could observe without obtruding, unless I chose to reveal myself as a reporter.

At the reception desk, clients rarely signed in. Instead, they waved as they proceeded with unslackened step directly to a private dressing room or to a particular workstation. “They know their way around,” said Mary Oh, a receptionist.

She helped guide me through an elaborate touch-screen control panel that color-codes and numbers each booking according to whether the client is new, a regular or a “very regular.”

“And Nina Garcia,” a receptionist chimed in.

Last year, Pierre Michel made headlines when word spread that it had banned Bernard L. Madoff’s wife, Ruth, from its premises. “Her colorist had to break it to her,” one stylist said.

On this summer day, the salon was expecting 245 clients (during the high season — from October to December — as many as 400 arrive).

Around 11 a.m., a series of extremely well-coiffed women in their 60s and 70s entered, already toting a day’s worth of shopping from nearby stores like Henri Bendel and Bergdorf Goodman.

PIERRE OUAKNINE, 70, and his business partner and childhood friend, Michel Obadia, 68, started a salon on East 53rd Street more than 40 years ago after immigrating from Morocco.

Today, Mr. Ouaknine directs the salon’s business side while Mr. Obadia, still an active stylist, oversees its creative direction. Both are at work most days, usually surrounded by family members. 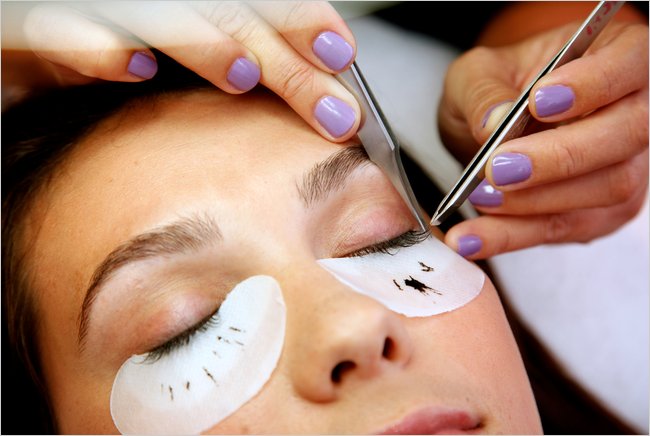 Dressed in a black Frank Stella linen suit, Mr. Ouaknine spoke to me in his office, which is equipped with a screen linked to a closed-circuit, multiple-camera surveillance system. He says he uses it to make sure his staff is always busy pampering customers. “All women are beautiful as long as they are loved,” Mr. Ouaknine said. “Here, we love them.”

Love is not free at Pierre Michel. While prices vary by head of hair, a typical invoice might include a $350 keratin treatment (straightener that also strengthens the hair), a $300 color job, $175 for a basic cut and dry, plus 20 percent in tips, not to mention something for the assistants.

“This is expensive, it’s time-consuming, it’s my idea of a splurge,” said Emily Vesely, a retired nurse who comes from Long Island every two months to see her stylist, Jerome Lordet.

Clutching her aubergine Longchamp bag tightly in her lap, the client submitted to Mr. Lordet’s silent assessment before being whisked away by his assistant, Ellen Rossi, for an intensive moisturizing shampoo and rinse.

“You see I have a lousy perm from Taipei,” said the client, who travels from Asia once or twice a year to see Mr. Lordet. After 25 minutes, the client gazed contentedly in the mirror at her mass of voluminous curls.

“They know I get my hair cut in New York,” she said of her friends back at home.

In a deeper recess of the salon, Mr. Lordet’s wife, the colorist A. J. Lordet, applied lightener to a client’s mousy gray hair, using a technique called balayage that uses tufts of cotton instead of aluminum foil for what is meant to be a more natural look.

Like several other women in the salon that day, her client, Ann Corless, an insurance executive, was there with family. Her daughter Sophie, 13, had an appointment with Mr. Lordet to repair an unfortunate layering job inflicted by a stylist in New Jersey.

“Jerome is Sophie’s treat,” said Ms. Corless, who has come to Mr. Lordet for more than 25 years. Before joining Pierre Michel, he was a wunderkind stylist at Bruno Dessange, the famous New York salon led by Bruno Pittini, who brought talented stylists like Frédéric Fekkai from Paris.

“Remember when I first brought you to Jerome after you cut your own hair with plastic scissors?” Ms. Corless said.

“He gave me a bob,” her daughter recalled fondly.

After lunch in the staff room, where employees quickly refueled on light gossip and even lighter salads while watching CNN, it was time to meet Sue Ellen Gifford, the eyebrow guru who boasts of having shaped the brows of Angelina Jolie and Oprah Winfrey.

“It takes three things to look good in New York: eyes, teeth and hair,” said Ms. Gifford, who studied physics and engineering in Romania. “The rest doesn’t matter or can be covered.”

By midafternoon, clients were lolling on couches, thumb-punching their BlackBerrys while waiting for their color to set or enjoying cappuccinos in the airy cafe, which featured snacks by David Burke as well as Cheez Doodles. By 5 p.m., male customers started arriving at the hair-washing stations, easing themselves into the reclining massage chairs.

The salon is equipped with wireless Internet access so that clients can work during their treatments. Some patrons even hold business meetings at the salon. “Anna Wintour used to bring her team in at 7 a.m.,” a stylist said.

But at Pierre Michel, where some clients have seen the same stylists regularly for decades, most pass the time catching up.

“God, whose wedding was that at?” Irwin Gasner said to Kenneth Tepper, the longtime hairstylist of Mr. Gasner and his family. (Mr. Tepper’s years of service to the Gasner family began at the Stephen Knoll salon, where he worked until last year.)

Mr. Tepper, who has styled the hair of Mr. Gasner’s daughters from bat mitzvah to wedding, boosted Mr. Gasner’s self image 27 years ago, reconciling his client to his ears. “Remember?” Mr. Tepper said. “You had that long, shaggy hair to cover them up.”

More recently, Mr. Tepper vetoed Mr. Gasner’s inclination to cover his gray. “I wouldn’t let him,” Mr. Tepper said. “As long as you have hair and a nice cut, it could be green and it would still look good.”

As he trimmed his client’s eyebrows and buzzed his neckline (nose, ears and brows are part of the $115 cut for men), Mr. Gasner confessed to having briefly gone local. “As the economy got tough, I thought, ‘Let me see if I can get a less expensive haircut,’ ” he said. “I went to the most expensive salon in Rockland County. Of course, I came running back to Kenneth.”

Back in the coat room, Erica Torres, the attendant, mentioned a variety of idiosyncratic preferences that she regularly honors: clients who request ticket No. 1 (“They’re like, ‘I’m Number One, I’m always Number One’ ”), a man who has a special 007 ticket written up for him and a woman who must have a private section of the closet because, “she doesn’t want her clothes to touch anyone else’s.”

The quirks of the rich and pampered are nothing new to Ms. Torres, 19, whose mother, Sonia Nau, a Pierre Michel employee of 26 years, is the senior coat check attendant. “I was practically born here,” Ms. Torres said. “I remember taking naps in the back and covering myself up with robes.”

She will enroll in cosmetology school in the fall. “I want to do color,” she said.